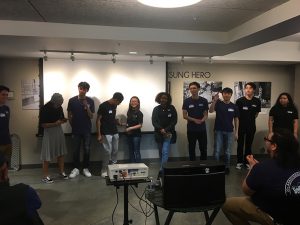 Attendees mingled together around the large food spread, which included dim sum donated by Joyale Seafood Restaurant. Sabrina Buparat, a recent graduate of Summit Sierra High School located in the C/ID, contextualized the mini-documentary. “We [youth at WILD] contribute to the development and safety of the Chinatown/International District. We have deep and informational discussions about problems in the community, including climate change, police brutality, and housing discrimination and how they are connected to racial and environmental justice.”

Kevin Choi, WILD member, introduced the film as the primary cinematographer and editor. He added, “We were inspired to make this documentary after learning about the history of displacement and how these new luxury developments will significantly change the culture and feel of the C/ID.”

In the film, Henry Liu, community organizer at Interim CDA commented on luxury developers’ attitudes: “[The CID] is a landmark not based on the history and culture of the place, but its value in relation to the water and downtown.”

This attitude is reflected in Koda’s promotional material online, as they describe Koda’s location in the Chinatown/International District: “Just outside the windows of KODA rests the city’s waterfront: the point of entry for the area’s first settlers that residents now look back upon in aspiration. An astonishing view of this extraordinary expanse demonstrates that you’re truly in the center of it all.”

Throughout the event, a shared feeling hung in the air of trepidation and fear that the luxury developers will not change the C/ID in ways that help traditional C/ID residents: Asian elders, low-income people, and recent immigrants.

Zhu Huang, C/ID resident and elder, spoke about her fears about displacement in the film: “others are younger, work, and have money. They’re not scared if prices rise… but us elders don’t have any jobs. The government gives us hundreds monthly, but hundreds isn’t enough.”

Reflecting on the event and the program, WILD participant Edgiemeh Dela Cruz stated, “Our research and mini-documentary focused on the C/ID, but displacement is more than just a neighborhood problem. Displacement of communities of color will continue as the city grows and gentrifies, but that doesn’t mean that we [young leaders] will back down. In fact, the future of anti-displacement activism in the C/ID will continue through the WILD program at Interim CDA.”