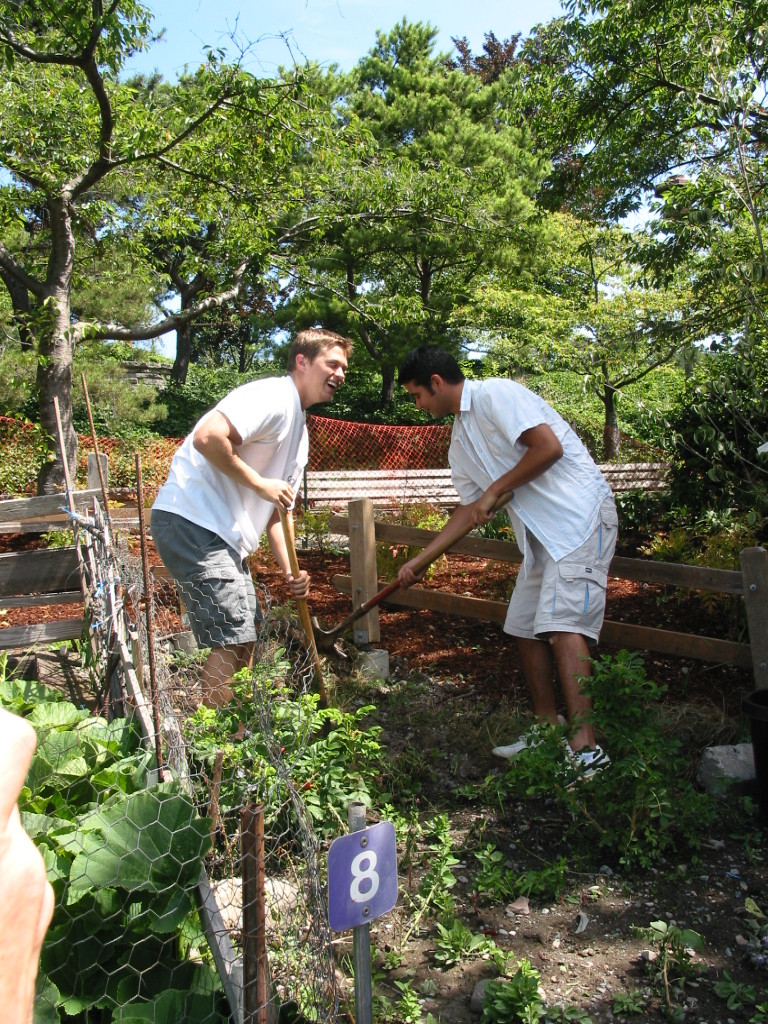 Seattle – InterIm Community Development Association (CDA) and the Wing Luke Museum of the Asian Pacific American Experience will present a new exhibit in The Wing that showcases four decades of the positive impact of the Danny Woo Community Garden in Chinatown-International District in Seattle. The exhibit opens on Thursday, March 3, 2016, with a free reception open to the public as part of First Thursday.

The Danny Woo Community Garden created in 1975 by community activists and volunteers in an effort led by InterIm CDA is 1.5 acres of green space that sits between Interstate 5 and South Main Street in Chinatown-ID. For 41 years, it has provided 88 garden plots for low income, elderly Asian and Pacific Islander (API) and other immigrants and refugees. The garden is a source of food security, socialization, exercise and vegetables that reflect cultural and traditional API foods of choice: bok choy, bittermelon, daikon, watercress, perilla leaves, mugwort, Asian eggplants, Chinese bellflower, Chinese pears and more. The garden also contains 61 fruit trees and 15 chickens who eggs benefit the gardeners.

The Wing exhibit, Seeds of Change, Roots of Power, will tell the strong social justice and activist story behind those who helped make the garden possible at a crucial time in preserving the character and livability of Chinatown-ID in the 1970s. The construction of Interstate 5 had cut the neighborhood in half, threatened air quality, and created noise pollution. The construction of the Kingdome was also going to negatively impact the neighborhood’s residents by driving up cost of living and creating a more industrial setting.

At this time, health, housing, and other social service resources specifically targeted for Asian and Pacific Islanders were scarce. Local business and community leaders formed InterIm CDA to address this need. Let by Uncle Bob Santos in the late sixties and seventies, InterIm CDA created and preserved affordable housing, health clinics and other resources to help this predominantly low-income immigrant and refugee neighborhood, including the Danny Woo Community Garden.
The garden provided a much needed place for elders work in, to plant the foods they missed from their native countries, and to provide social connections, recreation and exercise for the aging immigrant residents.

InterIm CDA led activists and organizations in negotiating with local landowner and community leader Danny Woo to acquire his property on sloping open space in the north side of Chinatown-ID and convert it into a useful, functional space for the residents in the neighborhood. The original idea for the garden as well as the design came from, Diana Bower, a local architect and urban planner who served as a liaison between city departments and the ID, and Darlyn DelBoca, who helped start Seattle’s P-Patch program and who become the Danny Woo Garden’s first manager. Santos recruited staff and volunteers to plan and build the garden, terrace the slope, haul the lumber, till the soil, and plant the first seeds. As they did this, the community came together and broke down racial, ethnic, and generational barriers.
Santos recalls the day he negotiated the deal to acquire the land: “Danny and Wilma Woo owned the Quong Tuck Restaurant and Lounge, which was becoming the hangout for the InterIm staff and local community activists. One day I asked Danny Woo for permission to build a garden for the Asian elders on his property above Main Street. But as a nonprofit agency, I told him InterIm could only afford $1 a year for rent. I also asked him, ‘Oh, and by the way, could we have a long-term lease?’ Well, Danny said yes to the dollar, but no to the long-term lease. That was in 1975, and InterIm is still operating the garden.”

The Danny Woo Community Garden celebrates its 41st anniversary this year at the annual two-day community pig roast on July 15-16.
Seeds of Change, Roots of Power officially opens at the Wing Luke Museum of the Asian Pacific American Experience on March 3, 2016, and it will run through January of 2017. The exhibit will feature video interviews with gardeners, photography, a plant identification guide, and a walking tour map so that visitors can walk to the garden, located four blocks from the museum. The reception opens at 6:00 PM. The speaking program begins at 6:30 PM. There will be light refreshments. Entry is free.
For more information on the garden and to learn how to support its operations by becoming a Friend of the Danny Woo Community Garden, contact Jill Wasberg at InterIm CDA. For more information on the exhibit and the Wing Luke Museum, contact Tiffanie Lam.